Right to the photos…

Fantastic, incredible, amazing – nothing quite does our eclipse trip justice.

I’d been thinking about this trip for nearly a year and I knew I wanted to head towards the path of totality. In January I figured I had plenty of time. I procrastinated and when I looked for hotel accommodations in early June, precious few rooms were available. I was about to panic! Fortunately, I wasn’t interested in being near a metropolis. I wanted some rural spot that was a reasonably short intercept from home and I figured there must be some such overlooked places. I eventually found a room in Blairsville, GA. which was in the path of totality and was going for a rate that wasn’t (yet) artificially inflated to exorbitant rates – and I jumped on it!

I’d never heard of Blairsville, GA. but it looked like a reasonable place after checking out Google maps and Wikipedia. Located about 25 miles south of the center line, but still within the path of totality, it’s in the Chattahoochee National Forest and near Nantahala National Forest in North Carolina. The forests were appealing; I figured they would offer some possible observing sites far from the crowds.

My biggest worries after securing a room were weather and traffic. The southeastern United States could easily be socked in by a weather system on eclipse day, but I’d have to chance that. I wanted to bring my own telescope but didn’t want to check it on a plane or drive across country to say – Idaho, where some of my co-workers were headed. And I didn’t want to be stuck in traffic as the eclipse approached. Julie, Peter, and I decided to arrive in Blairsville a day early to scout-out the area.

The weather on Sunday August 20th was looking fine and our plan to arrive early paid off. We scouted out a location just over the North Carolina border and right on the center line of totality. The spot we chose was on state route 64, a rural route cutting through Nantahala National Forest. This spot avoided the hordes near Andrews, NC., a nearby town that was also right on the line. Route 64 had wide shoulders and had been recently mowed. It was a perfect spot on which to setup our equipment. We would experience 2 minutes and 38 seconds of totality here – 39 seconds more than we would see at the hotel.

We met several like-minded eclipse chasers during our Sunday dry run. We met John and Jennifer camping in an RV from

Georgia, and Bill from New Jersey who was setting up his newly purchased Celestron 102 mm refracting telescope. A police officer stopped by to chat and assured us that this would be a good spot, so long as we pulled our vehicles off the road sufficiently. There was plenty of room, so no problem. He looked

through the eyepiece to observe the beautifully placed sunspot groups AR2671 and AR2672, proudly displaying themselves in anticipation of being swallowed!

We check out of our hotel room early on Monday morning, eclipse day, and headed north towards the center line in anticipation of traffic problems. There were none. We had little difficulty arriving at our chosen spot about a forty minute drive.

Excitement was in the air as we drove past private properties, campgrounds, a winery, and several churches – all displaying signs beckoning visitors to light here for the eclipse! We set up the telescope with great anticipation!

The weather cooperated and although we did have a few brief periods of  clouds, the sky was perfect during totality!

We met up again with John & Jennifer and Bill, as well as several other groups. The furthest distance award went to Douwe and Carolien from Holland! We also enjoyed the company of David & Terry from Georgia, Brendon & Jennifer from St. Augustine, FL., a group from Atlanta and a many others. Overall it was an intimate gathering of about a dozen different groups and a party atmosphere to be sure, all sharing food and stories while waiting for the big moment.

And it was hot! Our early arrival meant we had about three hours to kill as we baked in the sun. Thankfully, the nearby Rainbow Spring provided a cool spot and we took turns soaking our heads under a nearby bridge.

I had the idea of mounting a foam-board shield on the telescope – something to block the sun so I could see the camera’s LCD screen while making adjustments. The telescope looked somewhat like a gun turret on a destroyer. I had great fun aiming at Peter and making machine gun noises! He wasn’t scared.

I took three exposure-bracketed images every ten seconds during the event and eventually filled an entire 32 GB memory card! (I lost the last few minutes when the card filled.)

Don’t try this at home!

Throughout the entire event we kept hearing about safety – use solar glasses and filters. I felt pretty confident I had done everything correctly and things were working fine leading up to the event. But during the partial phase and with a little time to kill, I thought it would be cool to put a pinhole on the black shield to project an image. That didn’t work too well. 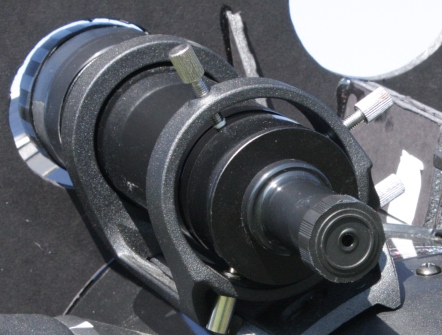 What worked great was removing the spotting scope filter and projecting an image of the sun onto a piece of white foam board. The image was large, bright and clear. But with the spotting scope and telescope eyepieces so close to each other, I thought it would be too easy for someone to accidentally get an eye near the spotting scope – with disastrous results! I should have immediately replaced the solar filter, but I decided instead to just attach the eyepiece cap. Bad idea! About a minute later I noticed the projected image had returned. Note the beautifully round hole melted into the cap! Now imagine an eyeball peering into that! You can’t let your guard down for a minute!

We started packing after the last of the solar disc reappeared. Our trek into the site had been tempered by the staggered travel of the hordes. Not so on our way out! When the event was over, everyone packed up and headed out. Route 64 was fine until we passed through the center of Franklin and on towards the interstate. We had planned our next layover in Mars Hill, NC. which was about 75 miles north. Traffic was backed up for tens of miles as we inched along, finally arriving at our destination some seven hours later (with a 1-hour stop at a Waffle House).

That’s the date of the next total solar eclipse over the United States. But this one will pass right over the Adirondacks! I’ll be ready for sure!

I am me. View all posts by DavidOrDave